U-Turn Physics under the Dome (part 2)You should begin training in high-speed landing by approaching in a straight line with acceleration by two front free ends, which must be pulled up by 10-12 cm.This approach will…

The main parachute "Segment"The main “Segment” parachute is a 7-section dome designed for acrobatics (rotation and rebuilding). The dome “Segment” is made of fabric with zero breathability (ZP, Gelvenor Textiles), equipped with slings…

Skydiving canopy pilotingDome Acrobatics (canopy RW, CRW, CReW) In this type of parachuting, athletes build various figures in the sky and perform rebuilding with an already opened parachute. At the same time,… 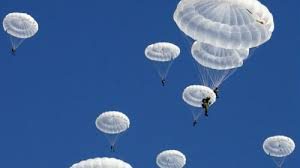 To date, the Tekhnodinamika holding company, which is part of the Rostec state corporation, has manufactured and prepared for factory tests 7 prototypes (6-year-olds, 1 will pass the ground test program) of the UPGS-4000 guided planning parachute-cargo system for unloading cargo from an airplane IL-76. This was announced on January 10 by the Rostec press service.

The UPGS-4000 system is capable of delivering cargoes with a flight mass of 3 to 4 tons with high accuracy, including to the most inaccessible areas of various types – both military and civilian. It will also be able to deliver humanitarian supplies weighing several tons to natural disaster areas. Flight and landing accuracy is ensured by automatic control and navigation equipment based on the signals of the Glonass / GPS satellite navigation systems, which are protected from electronic warfare by a potential enemy. Moreover, during the flight, the coordinates of the landing point can also be changed. The development is carried out as part of the developmental work of “Horizontal-4000” by specialists of the Moscow design and production complex “Universal” (part of the holding “Technodynamics” of the State Corporation “Rostec”).

Mass deliveries of the new system for the needs of the Ministry of Defense are scheduled to begin in 2021.