7-section precision parachute Malva-24SKAppointment The parachute sports system "Malva-24SK" is designed to perform all types of jumps both by individual athletes - paratroopers, and groups of parachutists from airplanes and helicopters designed to…

In Indonesia, the 38th SIZM Parachute World Championship ended. Our servicemen have once again proved that they have no equal not only on earth, but also in the sky!

The tournament was held in the picturesque town of Solo, located in the province of Central Java. For several days, servicemen from 42 countries competed in speed and accuracy of landing. 210 participants took part in the World Cup, including 152 men and 58 women. END_OF_DOCUMENT_TOKEN_TO_BE_REPLACED

The largest parachute production in Russia was opened in the city of Kirzhach, Vladimir Region

Parachute factory with an area of ​​5 thousand square meters. m, designed to produce more than 2 thousand parachutes for military and civilian use per year, opened on the basis of the Scientific Research Institute of Parachute Building (part of the Technodinamika holding) in Kirzhach, Vladimir Region, the press service of the State Corporation Rostec said in a statement “. END_OF_DOCUMENT_TOKEN_TO_BE_REPLACED 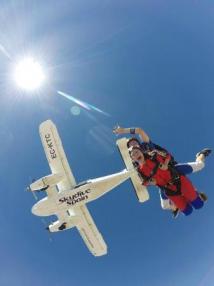 At first glance, a beginner expects a lot of difficulties in parachuting. In fact, everything is far from being as difficult as it seems. We will try to answer the most common questions that you may have after making a decision to test your strength in a jump. So:
What to wear?
• Wear special sports equipment, and if you don’t have one yet, you can restrict yourself to just comfortable casual clothes suitable for the weather conditions of a particular day.
• If you are going to change clothes before training, take a pair of trousers and a comfortable turtleneck or sweater with a long sleeve (but without a hood!) To wear them for jumping. END_OF_DOCUMENT_TOKEN_TO_BE_REPLACED