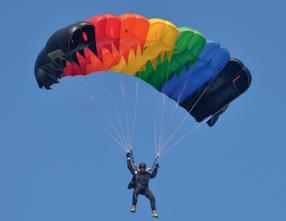 How to survive parachute failureFormer British Army instructor Emil Chillier found guilty of attempted murder of his wife Victoria. He intentionally damaged her parachute, but the woman survived, although she broke her bones. How…

In 2012, paratroopers made more than 150 thousand parachute jumpsWith the end of the calendar year in the Airborne Forces (Airborne Forces), the final results of the annual plan for landing personnel and military equipment from airplanes and helicopters…

In Indonesia, the 38th SIZM Parachute World Championship ended. Our servicemen have once again proved that they have no equal not only on earth, but also in the sky!

The tournament was held in the picturesque town of Solo, located in the province of Central Java. For several days, servicemen from 42 countries competed in speed and accuracy of landing. 210 participants took part in the World Cup, including 152 men and 58 women. The program included three exercises: group and single landing accuracy; single acrobatics; group acrobatics. In the team event, the team of the Armed Forces of the Russian Federation became the winner, having won 5 gold, 2 silver and 3 bronze medals. Moreover, the lion’s share of the awards brought the representatives of the beautiful half. Multiple world champion in parachuting, a member of the Russian national team, senior warrant officer of the Airborne Forces Elena Laktionova, became the absolute champion of the competition. She excelled in individual jumps in touchdown accuracy and biathlon. The master of sports of the international class, ensign Yevgeniya Furman, won the champion title in the discipline “single precision of landing”, and sergeant Olga Kravchenko became the silver medalist. In addition, she took second place in biathlon. Our female squad was not equal in team championship and group accuracy of touchdown. The best result in the men’s tournament among Russians was demonstrated by the senior sergeant of the Western Military District Aleksey Bykov, he became the silver medalist in biathlon. Also, domestic athletes became the third in the team championship.