The main parachute "Segment"The main “Segment” parachute is a 7-section dome designed for acrobatics (rotation and rebuilding). The dome “Segment” is made of fabric with zero breathability (ZP, Gelvenor Textiles), equipped with slings…

Within six months, the ZVO rescue team made more than 1000 parachute jumps 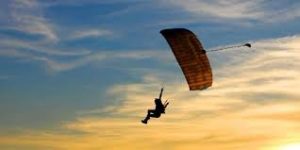 In the summer period of training, the specialists of the search and rescue and parachute landing service of the aviation units of the Western Military District completed more than 1000 parachute jumps. Of these, more than 300 jumps ended with landing on unprepared sites or were carried out in bad weather conditions, every fifth jump was carried out above the water surface and ended with flooding.

During this period, 3 gathering events were held at the Air Force and Air Defense Air Defense Forces association with search and rescue and parachute service officers, with parachute packers, with air defense rescue personnel and flight personnel as part of a comprehensive survival training.

The charges were held at the Baltimore, Ostrov, Gromovo, Khotilovo and Monchegorsk airfields in the Voronezh, Pskov, Leningrad, Tver and Murmansk regions.

During the landing from Mi-8 helicopters and transport aircraft, various parachutes and parachute systems were used, such as D-1-5U – an airborne parachute designed for training jumps, the Malva-24 parachute system designed for precision jumping touchdowns – splashdowns, the planning parachute system PO-17 and the parachute system special purpose “Crossbow-1”. This system is designed to perform jumps with a set of weapons and a load of up to 50 kg; it allows landing on unprepared sites and in difficult weather conditions.

During the implementation of a comprehensive survival training, the air defense rescue team and the flight personnel of the district’s aviation units worked out the elements of emergency leaving the aircraft, building a tent in the forest using a parachute and improvised tools, providing medical assistance to victims, extracting water and food in the wild, and using existing beacons to indicate your location.

The team of the Western Military District in acrobatics took part in the world championship in parachuting in Montenegro, where it set a new world record – 22 figures in the air in the discipline “four – rotation”.

7-section precision parachute Malva-24SKAppointment The parachute sports system "Malva-24SK" is designed to perform all types of jumps both by individual athletes - paratroopers, and groups of parachutists from airplanes and helicopters designed to…

First Jump Preparation: Beginner OutfitAt first glance, a beginner expects a lot of difficulties in parachuting. In fact, everything is far from being as difficult as it seems. We will try to answer the…